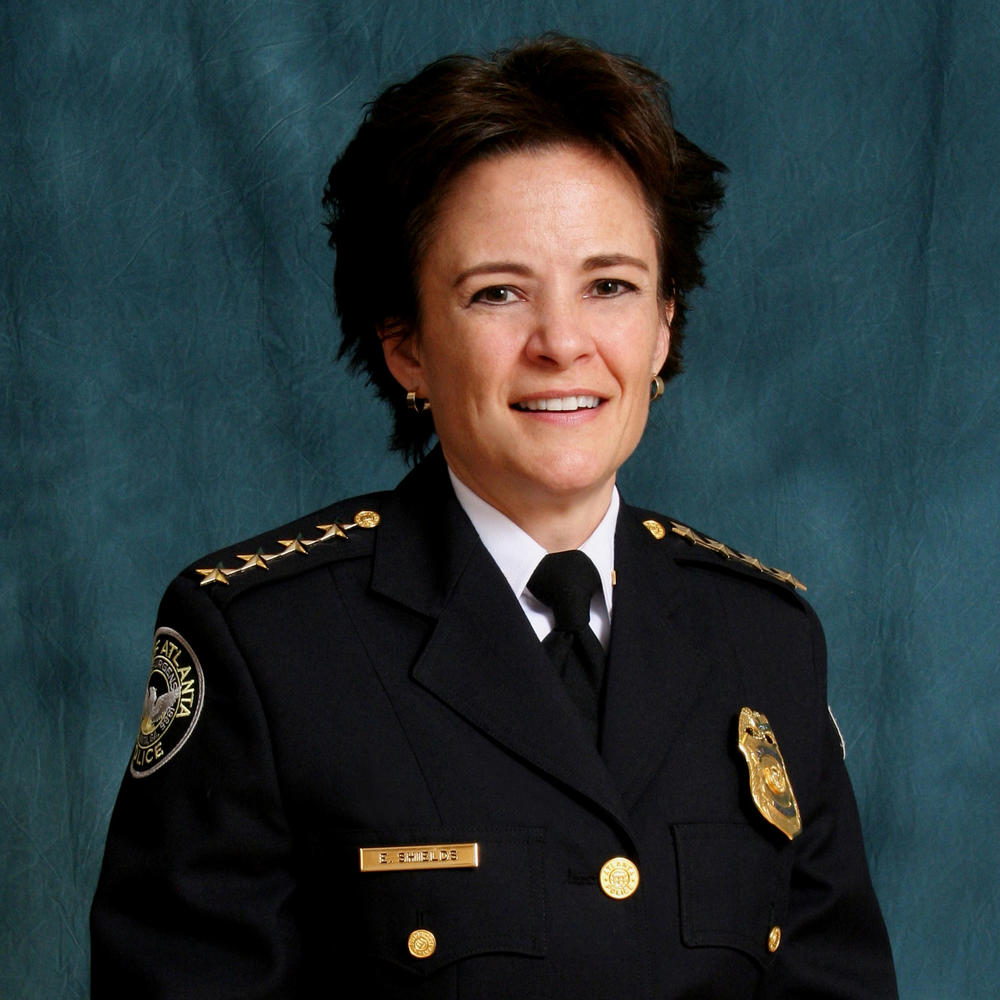 Erika Shields is the Chief of Police for the Atlanta Police Department and is a member of the Homeland Security Board.

Erika Shields is the 24th Chief of the City of Atlanta Police Department, appointed in December 2016. She is an advocate for 21st Century Policing – with a focus on reducing crime while also strengthening trust and collaboration with our communities. Chief Shields has a tough mindset on crime, but a compassionate and proactive approach to working with the community and its leaders while also ensuring accountability for officers. She is committed to developing a culture of technology, innovation, excellence and transparency throughout the organization.

Since her appointment as Chief, the department has made significant strides in its focus on reducing violent crimes and taking repeat offenders and stolen guns off the streets. She continues to work closely with judicial leaders to advocate for stronger sentencing for those individuals who commit violent felonies.

Chief Shields also believes engaging children and young adults is critical and takes a positive, proactive approach with programs like the Police Athletic League and the Atlanta Police Foundation’s At-Promise Center. These programs provide participants with an opportunity to interact with officers through mentorship and recreational programs.

Under Chief Shields’ leadership, the Atlanta Police Department is leveraging technology more than ever with video cameras, crime analysis and analytics to more easily track crime trends, adjust strategies and allocate resources accordingly. The Video Integration Center links more than 10,000 public and private cameras in a network to help identify and deter criminals. Operation Aware is a partnership with Microsoft that allows the agency to analyze crime patterns with greater efficiency and speed. The results are noteworthy.  In the Chief’s first full year in 2017, according to the FBI Uniform Crime Reports, major crimes were down 8 percent, armed robberies were down 32 percent, burglaries were down 23 percent and murders were down 29 percent compared to 2016.

To ensure the safety of both citizens and visitors during some of the largest high-profile events in the country, Chief Shields collaborates closely with private, local, state and federal partners to provide multi-layered security and traffic plans leading to successful events and a safe environment for everyone to enjoy.

Chief Shields sets high standards of conduct and expects professionalism from officers in their daily interactions with the public. She also expects them to be passionate in their efforts to reduce crime, while also showing compassion to victims and others affected by crime. She has a zero-tolerance policy for abuse or disrespect and works closely with the Atlanta Citizen Review Board to ensure third-party mediation of complaints by the public.

Chief Shields joined the Atlanta Police Department in 1995 following a career as a stockbroker. During her tenure, she has risen through the ranks as a Patrol Officer, Sergeant, Lieutenant, Major and Deputy Chief prior to her appointment as Chief.

As a Sergeant, Chief Shields was initially assigned to Southwest Atlanta and then moved to the Office of Professional Standards where she conducted Internal Affairs investigations. She was then assigned to the Advocacy Unit where she liaised with the Law Department in reviewing and presenting disciplinary files to the Chief of Police.

As a Lieutenant, Chief Shields was the Evening Watch Commander in Southwest Atlanta. From that assignment, she moved on to Commander of the department’s Planning and Research/Accreditation Unit where she developed and implemented all departmental policies and facilitated the CALEA accreditation process; the Staff Inspections Unit, which oversees inspections associated with the re-accreditation process; and the Extra Job Unit, which is responsible for the oversight of outside employment for employees.

Appointed to the rank of Major in January 2010, Chief Shields served as Chief of Staff, managing the daily activities of Chief George Turner’s office.  In 2011, Chief Shields rose to the rank of Deputy Chief and was selected to command the new Strategy and Special Projects Division. During her time in the division, Deputy Chief Shields was responsible for the further development of the department’s state-of-the-art Video Integration Center; to research and identify technological measures to support the crime analysis process; and to develop a comprehensive strategic plan.

Chief Shields holds a Bachelor of Arts degree in International Studies from Webster University and a Master’s degree in Criminal Justice from Saint Leo University. She is an active member of the Georgia Association of Chiefs of Police (GACP), the National Organization of Black Law Enforcement Executives (NOBLE), the International Association of Chiefs of Police (IACP), and the Police Executive Research Forum (PERF).  She was appointed as a board member to the Criminal Justice Coordinating Council by Gov. Nathan Deal in August 2017.